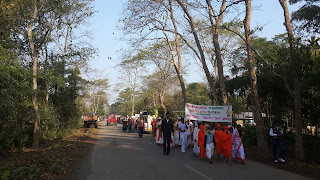 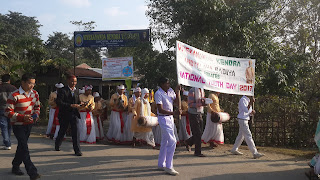 National Youth Day, 12 January 2017, was celebrated in the school premise and five other places in the vicinity of Sadiya. There was a rally taken out from the school campus up to the field near Circuit House of Sadiya. The rally had included groups of Gayan-Bayan ,Nepali community, Deori community, Parents, Teachers and Students with Nepali cultural Band, School Band group and assembled in the field where there was puspanjali Ceremony, Speech and a light refreshment. Around 700 people took part in the rally. 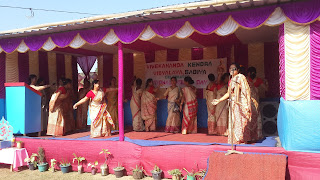 There was a short cultural programme in the school to celebrate 154th birth anniversary of Swami Vivekananda. The Chief Guest Shri. Hiranya Barman, Additional Superintendent of Police, Sadiya district addressed the occasion along with Guest of Honour Smt. Pronoti Gogoi (writer, social worker). Along with the school programmes like Action Rhymes by Nursery and K.G, Assamese dance, patriotic song, drama and speech there was also one traditional Id-u dance performance by the students of Nestling Hornbill School (Roing, Arunachal Pradesh). The parents of the School also performed in three diverse traditional dance forms like Assamese Bihu, Deori Bihu and Nepali dance which was applauded by the audience very much and they gave a standing ovation to appreciate them. Teachers of Anandalaya group also participated with cultural dance and shared their experiences of running their schools. Approximately 500 people attended the program. 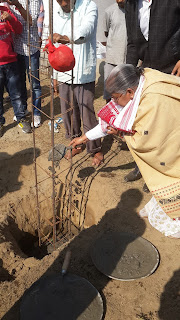 On this auspicious occasion, there was laying of the foundation stone for the construction of a new building donated by the name of Late. Ramesh Kolita and the family were present to attend the same. Smt. Amiya Kolita wife of Late. Ramesh Kolita was felicitated along with her daughter Gitanjali Kolita Gogoi and son-in-Law Shri. Mahanto Gogoi.

at January 12, 2017
Email ThisBlogThis!Share to TwitterShare to FacebookShare to Pinterest